What's in a Friend 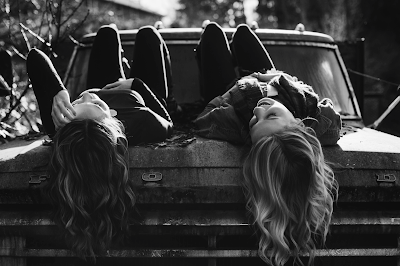 Friend — the face I wallow toward
through a scrimmage of shut faces.
Arms like towropes to haul me home, aide-
memoire, my lost childhood docks, a bottled ark
in harbor. Friend — I can't forget
how even the word contains an end.
We circle each other in a scared bolero,
imagining stratagems: postures and imposters.
Cold convictions keep us solo. I ahem
and hedge my affections. Who'll blow the first kiss,
land it like the lifeforces we feel
tickling at each wrist? It should be easy
easy to take your hand, whisper down this distance
labeled hers or his: what I like about you is

We're going to do something special this month. For each week, meaning each Tuesday of February, we will feature a love poem.

And as soon as I said that, it felt like it's not special at all. It actually sounds like the biggest cliché out there: poetry and love and Valentine.

I think, well it's the media's fault. Everything is. The movies, the songs, if ever there's a poet in any of them, they're always portrayed as this tortured, suicidial person. Always in love, always misunderstood, and brooding.

And love, it's always the sentimental or romantic kind. Not that there's anything wrong with it, of course. But there are other kinds, too, and we don't see them as much.

So I'm going to share my favorite quote-unquote love poems. And we're starting off with What I Like by Alice Fulton.

I forgot when I first read it. But with Alice Fulton, what attracts me to her work is the playfulness in language. There are so many confessional poems and when I discovered this poem, actually when I discovered her book, Sensual Math, almost every poetry book available were in conversational language. But Alice, and this is why I love her, she uses language that calls attention to itself.

It's clever, but not that bad kind of clever. Not the winking-at-you kind of clever. I wouldn't say that she's difficult as well. But definitely you will have to read her poems more than once to get a better sense of them. And the more you reread them, the more they become beautiful.

Going back to What I Like, so the title sets up an expectation. It's a very short poem, a small block, a single stanza, and initially you would expect that the stanza holds the answer or the explanation to "What I like" — to what the speaking voice likes.

But then you reach the end and you get an aposopesis that can mean several things. It can be teasing, like, "What I like about you is… come on take guess". Or it can be self-censorship, because you might not be ready to confess some thoughts and feelings yet about that person. That once you speak the truth, it might open doors that you're not yet ready to open. Or it can mean being completely dumbfounded, an honest speechlessness, because you honestly can't figure out why you like this friend.

Let's to focus on that last one, the enigma of certain people. Why are we drawn to those whom we are drawn to.

We can have a checklist of qualities: kind, funny, gets me, et cetera. And we can meet lots of people with those qualities and yet we only really click with one or two of them.

The word friend itself is also very interesting. Among the big words, friend remains to be a weighty word. I don't think we have diluted it with our non-stop use and abuse. I mean, we complain about Facebook ruining the word, but despite that we still have a very strong and a very personal idea of who a friend is. Especially who a friend is to us.

And the poem highlights that, I think. Friend, phonetically is a soft word. There’s the FR at the begining and then the D at the end, a soft consonant. It's gentle, very easy to throw around. There's the line, "friend — I can’t forget how even the word contains an end". In there the poem points at the hard side of the word.

By hard I mean harsh and sad. Because, yes, friendships can end. But hard can also mean complex. Friendship is complex. The poem talks about the "end" in friend, but it's also difficult to determine the beginnings of a friendship.

Friends slip in and out of lives. There are those whom we have only met once or maybe have been with for only a short period of time, but the bond can be so tight that if they if call you at 3AM, you'll be there for them. On the other side that, sometimes we have close friends, then we have a falling out with them. No big fights, no clear reason either why you stop being friends.

I remember watching a video — I'm so sorry I don't have the exact details, it was a very long time ago — the video was a discussion on frienships versus romantic relationships. And one of the points they made is that with a romantic relationship, and marriage as well, you have a clear agreement, whether it's a legal contract or a verbal agreement, that you are officially together as partners. Whereas in a friendly relationship, you don't have these consensual rules and markers. Not even societal rules, I believe now that I think about it.

Sometimes I'd ask, "How do you break up with a friend?" Yeah, that's an actual problem. Give me an answer, please. Leave a comment wherever you can.

And that also reminds me now of this article, maybe you’ve read it as well, saying that our views on friendship are often not mutual. In other words, I might consider you as my friend but that doesn't mean that you consider me as your friend. So just because we hang out and even go through some tough times together, we won't always have the same valuation of each other.

It's fascinating how we select friends. Is it the person? Or our standards? A combination? Plus timing and the weather? I don't know.

One last look at the poem. The persona, for me, wants to end the friendship and jump onto a sexually charged relationship, no, let's just call it a romantic relationship. I don’t want to say, "next level" because for some, friendship is there on top of the relationship hierararchy.

That's the nice thing about friends, right? We can choose them.