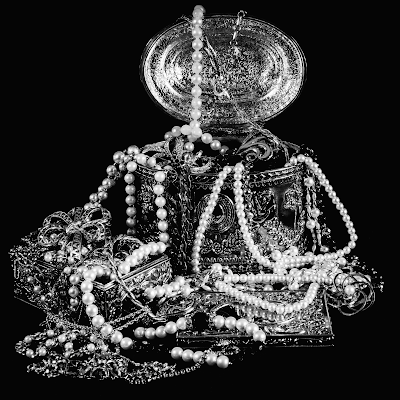 I like flowers. I think it's a good symbol. Flower. You have to pay attention to it, in a way that you have to both admire and take care of it. A flower's life is so short, and I think it's the same with the parts of love that we fantasize about. The happy parts. I liken it to a burst of emotions. It's alive and real at the moment, then it dies. Soon. Like our feelings of love, which must be renewed and reasserted over and over, we give our loved ones flowers again and again.

Chocolate, maybe. It depends, I think you have to have an agreement with your partner. Let's say what type of chocolate they like. I don't mind chocolates. But if it has to be food, I prefer a nice meal. Or if it has to be something sweet, I prefer that we share it, like have an ice cream together, even if I don't like ice cream. The shared moment is what's important.

What else? Love letter? I think that's a very good one. But that's the writer in me speaking. I would love to receive love notes, and when it comes to that, what I notice is this, because of social media. We tend to post our love letters in public, like, you know, the Instagram posts with a nice picture and the really eloquent letter. I understand that. I get that and sometimes I want that. And I also take pleasure in doing that. I take pleasure in public displays of admiration. Shouting to the world what you love and why you love someone, and what you see in them. But for me the private — I miss the private nature of the love letter.

In this episode, it's Edward Thomas. He's often compared to Robert Frost and I see the similarities, especially in the rhythmic lines. The thing about Edward Thomas is I didn't encounter him in school. I'm actually a bit shocked that — well shocked is an overstatement, but yeah I was surprised that he was not required reading in the English courses, in the Literature and English courses.

I found him, I believe on Kindle. If I may digress, we know how sad the bookstore situation here is right now. Yesterday I went on a book hunt and I realized that very little excited me! But even way back, when Power Books and Fully Booked were exciting places to be, I don't remember ever seeing an Edward Thomas book in their shelves.

Right now I only have a digital book. I have his collection, it's just entitled Poems, on my Kindle. In it he has this series of poems about what he would give to his — I assume — I haven't read much about his biography. I must confess I don't like reading author biographies, I'm not interested in their lives.

The first lines of the poems are also the titles. So the first one in the series is called, If I Should Ever By Chance, and it goes, "If I should ever by chance go rich, / I'll buy Codham, Cockridden, and Childerditch, / Roses, Pyrgo, and Lapwater, / And let them all to my elder daughter".

That sets the tone of the series. And by the way I tried to find out how to pronounce those places. I still am not sure, I hope I am pronouncing them correctly. But anyway, yeah, that's the idea. If he should be that rich as to buy those places, he would give them to his elder daughter.

And then the next one, it's called, What Shall I give. "What shall I give my daugher the younger / More than will keep her from cold and hunger?"

That's for his younger daughter and then the next one I believe, it's for his son. It's called, If I Were To Own. So again it's all about possession. If you have all the resources in the world, what would you give your loved ones? It goes something like, "If I were to own this countryside / As far as a man in a day could ride, / And the Tyes were mine for giving or letting..." And then he goes on and says — somewhere in the middle he says, "I would give them all to my son".

And then finally he goes to his wife. We can deduce that it's for his wife. It's called, And You, Helen. This is the poem that I would like to focus on, so I'm going to read it entirely.

And You, Helen
By Edward Thomas

And you, Helen, what should I give you?
So many thins I would give you
Had I an infinite great store
Offered me and I stood befoe
To choose. I would give you youth,
All kinds of loveliness and truth,
A clear eye as good as mine,
Lands, waters, flowers, wine,
As many children as your heart
Might wish for, a far better art
Than mine can be, all you have lost
Upon the travelling waters tossed,
Or given to me. If I could choose
Freely in that great treasure-house
Anything from any shelf,
I would give you back yourself,
And power to discriminate
What you want and want it not too late,
Many fair days free from care
And heart to enjoy both foul and fair,
And myself, too, if I could find
Where it lay hidden and it proved kind.

I don't know, I'm not sure but I'd be very interested to find out which line struck you the most while I was reading that poem. But for me it was the last couple of lines. I would give you back yourself. So often, it doesn't have to be in a relationship but I think just life, just living we could lose ourselves. For me it has something to do with identity. That could be the gift that he would want to give Helen.

And then the next part of it is rather sad. He says, and want it not too late. There is a possibility that we might know what we want but then it's too late by the time we figure that out. So there's a bittersweet line there.

And then finally he says he would give myself, too — himself, too if he could find where it lay hidden and it proved kind. Yeah he would give himself, so — I don't know, his time, his attention, his love, and his kindness? And I do think that's — I think that’s the best gift.

I don't know, how about you? What gift would you give to someone you love? What would you like to receive?