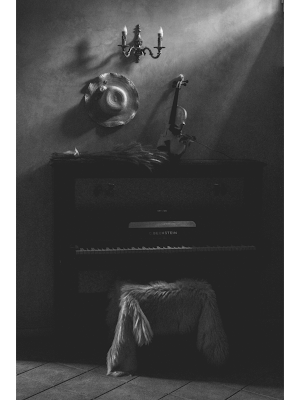 This is a tricky one. I've chosen a Tagalog poem and I'll be talking about it in English. If I were ambitious I'd write my own translation. Actually I really want to, but that would take a lot of time and battling with self-doubt.

For now what I can do is describe the images and what's happening in the poem. Which is how we discuss a poem anyway.

The first stanza gives us an image of an old piano. There's a joke that Filipino households have pianos that are never played. It's just for decoration. That's what I imagine in this opening verse. For the sake of this conversation let's use "he" for the speaker and "she" for the imaginary "you". Does that — I hope that makes sense.

He thinks that her Kalooban — oh my god, kalooban is one of those untranslatable words. But anyway, he thinks that her, let's call it innermost self — which contains her deepest thoughts and desires — is like a locked piano, which key is thrown away to an unknown and unsearchable place.

Therefore no one can get to her. No one can engage with her anymore in a way that no one can play with the metaphorical piano anymore.

The next couple of stanzas describe the silence of the girl, who is weighing the situation in front of her. Again, I'm translating. It's a lyric poem in that it highlights music and nothing is really concrete, only an atmosphere and a vague idea. We have this image of a girl who is not yet ready to open up, and yet the speaker sees some spark in her eyes.

The speaker knows, he can see some fire, some life in her; but he also understands that the girl can't immediately be intimate with acquaintances. And we all know someone like that. Or we are like that sometimes, or most of the time.

And until now; by now we mean the real — I'm going back to the poem — until now, the real time wherein the persona is talking, this "you", the girl is wrapped up in her own horizon, I believe her internal horizon. Lumulutang sa sariling mong ulap. Floating in your own cloud. Then he closes with an image of kakahuyan — forest or woodland — which resonates with the opening image of the old wooden piano. This woodland is described to be filled with branches and leaves that no light can enter. So the branches and the leaves serve as a sort of wall, so that no light can enter.

I mentioned silence a while ago, and that's what I like about this poem. It has two very striking and very sad images. That of a locked piano and the woodland that shuts off light. Imagine that, a piano is built for music, but in this poem we can't play the piano. We can't hear the music it can make. Then the forest or the woodland which is supposed to be a life source, but it's dark.

But here's the thing. There is a mixture of hope and frustration here. The speaker would definitely like for the girl to let people in, but it’s taking so long. Reading this and taking on the voice of the speaker, I am hanging on to that spark in the eyes that he mentioned. Maybe it's not today, maybe it's not tomorrow, maybe it would take years; but I remain hopeful that I will get through this person and begin to really know her.

But what I find even more delightful is this. The "you" in the poem. The person who is a locked piano. She could be the one having that thought lingering in her head as well. That Akala Ko. She could be saying that as well. She looks around her and maybe for now she questions everything, she hesitates. For now she feels like staying in her comfort zone, or maybe she’s still finding the right time to open her heart. In the end, I want her to say, Akala ko... pero hindi pala... In the end I am hopeful that she will prove her doubts wrong.