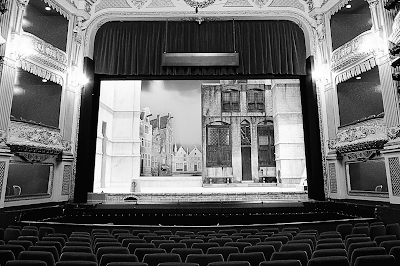 This time last year, I mean January 2020, I was looking forward to seeing my first show. Well not my show, but the first theater production of the year that I had the privilege to get a ticket to.

Usually I would watch around 10 to 15 shows a year. If had all the resources in the world I would even travel to catch whatever play or musical I want.

So the first show that I watched last year was Stage Kiss by Sarah Ruhl, who I would say is pretty propular here in Manila. I double-checked, I went to my box of tickets and the exact date that I saw it was February 7, 2020.

It was the first of three shows that I saw that year. After that there was the original Filipino play called Batang Mujahideen, and then in March, I saw the big international musical at Solaire, which was Matilda.

I was so happy that I saw Matilda because not only did I love the musical. I didn't expect that I would love it as much I did — do. I mean I still listen to the soundtrack up to now. I remember I booked a ticket to the opening week. And then Friday that week, I'm not sure but it felt like towards the end of that week that was when we heard confirmed cases of virus transmission and a state of emergency was declared.

And after that we all got stuck at home.

So in this episode it will be just me saying that I miss theatre and explaining why I love it. And I think Stage Kiss has helped me figure out what it is about theatre that I keep going back to.

First of all Stage Kiss, is, I think you'll have an idea what it's about based on the title. But yeah, the lead characters are ex-lovers who are also actors, and they are brought into this situation wherein they have to work together as lovers on a new show. And in that show, as you can guess, there a lots of kissing. The lead characters have no names, they're just called She and He and at one point the two of them get into this "stage kissing" conversation.

He — the male lead — says that theater actors have to be good-looking, especially when they’re going to do a kissing scene because, and I quote:

People don't like to see the act of kissing onstage. That's why actors have to be good-looking, because it's about an idea, an idea of beauty completing itself. You don't like to see people do more than kiss on stage, it's repulsive.

That's what he says. To which, She — the female lead — says, Why then do we watch people have sex in films?

He again responds, and I again quote:

I will neither agree not disagree that theatre is superior to film, nor would I expound on the idea of who would we rather see or not see kiss onstage or onscreen. But I would like to draw attention to what He, capital H, touches on in that dialogue, which is the communal aspect of theater. The self-aware — at least ideally for me — side of theater.

Everything is live, right? There are the actors onstage, there is the audience, there's the crew and the theater house staff. So there is this whole awareness of everyone around you who is conscious of what's going on. Again, ideally.

Let's say you're watching an adult film or a film with a sex scene with your parents. It's awkward when the sex happens. Now in theater you see people in front of you kiss and you are aware that there are other people with you seeing the same thing. They don't have to be your family and it may be dark inside, so you can't really see each other, but for me, I can't turn off that awareness of other people present.

What I'm trying to say is theater is a society-aware art form. Let's say you laugh at a joke and the other audience members don't laugh or they laugh but you don't find anything funny. At that very moment you're already having a sort of dialogue with the people around you. There's that immediate acknowledgement and review of our behaviour.

There is this dynamic and on-going silent conversation between (one) the co-actors, and then (two) the actors and the audience, and (three) the co-theatergoers, if I'm allowed to invent a word.

The whole act of making meaning or making sense out of a piece of work is far from solitary in theater. Imagination is a shared power and it happens in real time.

And I know I say that I like it because of its communal aspect but another reason that I like theatre is that it's that one event wherein I can be surrounded by lots of strangers and it's okay, I feel calm.

Yeah, I miss it. I really miss going out. What more can I say.